skip to main | skip to sidebar

Once the house is in order, where do I go from there?

Perhaps it is a good idea to begin clearing out things that may obstruct your aim. Maybe employing the reverse vector as Rose puts it and begin a retreat from untruths in your life. Things that you know already to be getting in your way. Things that clutter up both your physical surroundings as well as those in your inner house. Things like habits and addictions that need to be addressed. Often your material surroundings can be a reflection of what is going on in your inner life. Look for dead end patterns, energy leaks. Examine your sex life. This is the center of our energy force and the point of greatest disipation and energy loss. Rose recommends celibacy, a daunting term that is fraught with misunderstanding and heavy religious overtones where it may be as simple as conserving energy and lifeforce and allowing one to gain mental clarity and intuition. Celibacy is not merely refraining from intercourse, but refraining from all sexual activity in thought and action. This is a topic that warrants a thread of discussion all its own and is at the core of Rose's principles and many others throughout the centuries. Keep in mind, those who scoff at the practice, haven't given it much of a chance.
Posted by PyramidZen Admin at 1:48 AM 4 comments:

Why does the passage of time seem to accelerate as we grow older?

This is a good question. Rose often talked about the concept of 'duration', and how we actually determined the length of a second, minute, or an hour. He said that space and time were incontrovertibly intertwined, and without space there was no time, and without time there was no space, as is the subject of scientific relativity experiments. To a man in a delirium, a second can seem like an hour, whereas to a man in love, an hour with his beloved can seem like a second. It may well be that time is not passing, and that it is our consciousness or awareness that is moving though an already played out strand or drama, of which we take ourselves to be the main character. We are but a Witness, in the Final Analysis, though this is theory until proven by experience for each individual.
Posted by PyramidZen Admin at 8:51 PM 5 comments:

How can we avoid tricking ourselves into thinking we are making "progress" on a path when we may just have something on our mind to the point where we think we are hitting something? (an example of this is people who think they possess some special power when street lights go out as they pass them, when actually it is just because they are on a timer and go on and off anyhow.)

I have known so many people who think they are controlling the elements when the answer is really quite mundane and mechanical.

We may not be able to avoid tricking ourselves into thinking we are making progress on the Path, but the Albigen System is structured so that we may be able to offset such self-induced trickery with the aid of other people, in a group confrontation session. Or we may use what Mr. Rose called "Milk from Thorns", which means we use that which uses us, in this case we would continue our self-analysis and self-questioning to include such thoughts as "How might I be tricking myself here?", or "What ego might be behind these thoughts and feelings?", or "How can I better define the idea of 'progress on a spiritual path', in light of these recent developments?". The whole path or effort centers on a never ceasing questioning of our entire being, and all that takes place within its domain, until a Final Answer is forthcoming.
Posted by PyramidZen Admin at 8:48 PM 3 comments:

What is it that attracts some people to embark on a Spiritual endeavor while others show little or no interest whatsoever?

People are on different levels, different 'rungs of the ladder', as Mr. Rose used to say. Some are driven by circumstances, miserable or otherwise, to search for release, which at first may be a drive for psychological healing. Others, fewer in number, are born with or develop a curiosity about themselves, their purpose, origin, and destiny, and thus they enter a Spiritual search, in hopes of finding real answers to those questions.
Posted by PyramidZen Admin at 8:47 PM 14 comments:

An important topic for those entering a spiritual path, or for those already on one and maybe in need of something to inspire focus is what Rose refers to in the Albigen system as getting the house in order. Here is a quote from pg. 186 of THE ALBIGEN PAPERS.

"We must be on the alert for impediments that are physical as well as mental. We must begin by setting our house in order, and this means the dwelling in which we live, as well as our physical body. This business of putting the domestic situation in order need not be an enormous undertaking, nor a drive for wealth. It simply means that a person cannot think, study, or carry on work with a group or school if he is beset by domestic irritations and interruptions. And even after the household has been placed in order, as long as we live we must still work to keep it in order, or run the risk of traumatic interruptions... The process of setting the body in order may be very complex, and it too will demand consistent attention. Sometimes yoga exercises help, but the practitioner must watch for signs of sleepiness and the type of peacefulness that drowns out any desire for exertion."

How can we begin to get our house in order?
Posted by PyramidZen Admin at 9:15 PM No comments:

Peace Of Mind, Success Without Regret

" Maintain Truth in all endeavors. Keep things simple, and direct. Stray not from your commitment." John Rose

Poster From the Early Days

YOU ARE A ROBOT

The Pyramid Zen Blog is back on track after a long time of being dormant. Let's get some energy going and share ideas, experiences, and anything that may help one another on the Quest. Check back often as I am in the process of posting new material. Looking forward to your observations and ideas.

For more, in-depth information on the subject of temptation and Richard Rose's psychology, go to www.richardrosepsychology.com 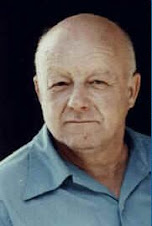 In The Front Yard 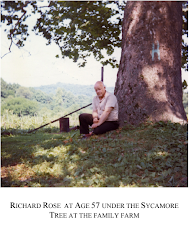 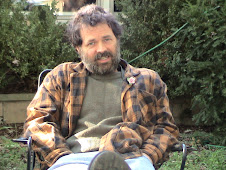 Where I get my best work done.

PyramidZen Admin
The Pyramid Zen Society is a small group of students who subscribe to the teachings of Richard Rose. We opened this blog site to encourage self-inquiry, using the principles and "yardsticks" that Mr. Rose specifically laid out for such work. All questions will be answered within the context of that teaching since we have found it to be such a valuable resource on our own paths. We discourage argument for the sake of promoting an agenda or prosyletizing. However, constructive critical exchanges and even planned confrontation sessions on a particular topic can be helpful tools in the process of overcoming obstacles on the spiritual path. The monitors of this site reserve the right to disregard any content deemed inappropriate to its primary philosophic purpose.